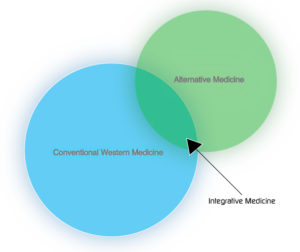 Now more than ever, Integrative Healthcare is becoming more viable as a potential remedy for what is ailing America’s healthcare system. Currently, we are facing a national crisis on just how we are going provide healthcare to Americans and keep it affordable and fair for everyone.  Unfortunately, if we don’t change our underlying philosophies, I don’t believe we will find an answer within the current system.

The main reason that we won’t be able to fix this system is that its’ focus is in the wrong places:  illness care and gross profiteering for third parties.   I am in a position as a Integrative Healthcare provider to have an opinion on the first problem.  The issue revolves around the fact that you cannot build a national healthcare system whose main approach is heroic medicine.  This is a treatment strategy that focuses on illness care only.   No level headed person would argue that this aspect of medicine isn’t extremely important; however, as far as creating a national healthcare policy, it should figure less importantly into the equation than it does currently. Simply stated, keeping people healthy will always be much more inexpensive than treating illness.  Our philosophical focus should shift from waiting until a person develops the acute or chronic health problem, to preventing it in first place.  This can be accomplished by relying heavily on education and incentives for health as well as including so called, “Alternative Therapies”, into our healthcare system.

Of course, Social Medicine in America has been helping to influence national healthcare policies for a long time and has talked endlessly about the importance of health education and incentives – if our national leaders and populace would only listen!  The drumbeat goes steadily onward yet, we as a nation don’t heed the call.  Everyone knows the importance of not carrying extra weight yet, obesity rises continually.   We all know that exercise is a great way to improve cardio-vascular health yet, we are more and more sedentary.   The same can be said about unhealthy habits, lifestyles, too much stress, environmental exposures, etc.  Somehow this message needs to get through as it forms one of the most important aspects of true preventative healthcare.  We as a nation need to step up to our personal responsibilities and do our part to keep ourselves healthy.

A way to reduce cost while providing superior healthcare would be to include more evidenced based “Alternative or Complimentary Medicines” as part of our integrated healthcare system.  These therapies, which include acupuncture and Chinese medicine, are already widely used by many Americans to treat chronic health problems and to prevent illness.  Additionally, the evidence mounts daily about some of these medicines effectiveness.  But due to the fact that most of these services are not covered by our current insurance systems, they are greatly underused.  This is very unfortunate as we are wasting a vast resource whose fundamental philosophy is in line with where our national healthcare needs to shift.  In essence, these therapies whose roots are often found in ancient cultures, are another part of the remedy for today’s healthcare ills.

Although a huge amount of money can be saved by shifting our focus from illness care to real preventative healthcare, this shouldn’t be the only driving force.  Another compelling reason is the tangible, real life benefits of being healthy.  When we are physically healthy, we in a much better place to be happy, harmonious, community minded, in service to others, productive, financially sound, etc.  We are then more likely to self-actualize, grow, transform, and ideally become more whole.  Therefore, we stand a much better chance of being successful and thriving in life, rather than merely surviving.  As far as society is concerned we are then in a much better place to be a contributing member of the community.   Doesn’t that sound like that would serve the greater needs of the nation a little better than our current system?

If you agree that an Integrative Healthcare approach is a good idea, support your local complimentary healthcare provider or talk to your local Senator or Representative about changing our current system.   Check out www.hughsacupuncture.comfor more information about Traditional Chinese Medicine and other health topics.  Thanks for reading!

Which Natural Health Supplements Are Right for You?