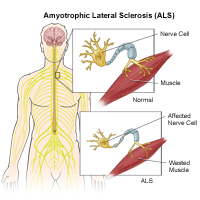 With ALS gaining a great deal of national attention lately, I thought it might be interesting for people to hear how Traditional Chinese Medicine (TCM) views and treats it. First of all, what is ALS?

ALS is short for amyotrophic lateral sclerosis, a degenerative disease of the motor nerves in the central nervous system that ultimately leads to the weakening and wasting of muscles. It primarily affects muscles of movement and posture, as well as those used for swallowing and breathing. Because of its effects on respiration, ALS is eventually fatal for most people. There is speculation as to what causes this degeneration, but as of now, the cause is unknown. Western medicine has a few treatments that help with mitigating the symptoms and sometimes slowing ALS’s progression; however, a definitive cure has yet to be found.

TCM has long been used in Asia to treat diseases of this nature. In its nomenclature, ALS is said to be a disease of Qi deficiency of the organ systems that nourish the muscles and of the main meridian along the spine.   TCM typically utilizes Chinese herbs, qigong, and acupuncture as its main modes of treatment. As ALS involves the nervous system, acupuncture is often relied upon as the primary treatment because it said to directly treat “the root and the branch”. This means that it can have a direct impact on ALS’s progression and help lessen the symptoms.

Although it is most likely not curative, there have been limited studies that show for a small percentage of people treated by TCM, their ALS will go into remission and for a much larger group, help slow progression and mitigate symptoms. I have personally seen it help those suffering with ALS by improving swallowing and by reducing spasticity in muscles, thereby improving movement. As you can imagine, helping a person to swallow and breathe is immensely profound.

Traditional Chinese Medicines’ treatment of ALS is highly individualized and is based on the severity of symptoms and progression. Thus, frequency of treatments and the modalities used will vary according to each case. A practitioner of TCM will come up with an appropriate course of treatment in conjunction with a client’s current therapies.

If you or a loved one is suffering from ALS, consider TCM as a potential treatment. More information can be found at my website at www.hughsacupuncture.com .

Healing Is a Journey